Where to keep & how to replace vital documents

http://www.kiplinger.com/article/business/T021-C000-S002-how-to-replace-vital-documents-and-records.html
To learn more, come to Financial Planning for Women on Wednesday March 2 (a week early due to USU's spring break). We will focus on securing your financial and vital documents to weather disasters. FPW is a monthly educational seminar that meets the second Wednesday (usually but not in March) of most months at two times: 11:30-12:30 p.m. in the USU Taggart Student Center room 336 (Bring a lunch), and at 7:00-8:30 p.m. at the Family Life Center, 493 North 700 East, Logan (at bottom of Old Main Hill). The longer evening time slot allows for more discussion. Programs are free and registration is not required. Men are always welcome. New attendees will receive copies of personal finance magazines.
Each time you attend FPW between January and March you will be entered into a drawing for a free financial advising session.
Posted by Financial Planning For Women at 2/27/2016 2 comments:

Invest in funds consistent with your values. Kiplinger Magazine suggests 7 funds. Be sure to note the expense ratios. http://www.kiplinger.com/article/investing/T041-C009-S002-7-great-socially-responsible-mutual-funds.html

Posted by Financial Planning For Women at 2/27/2016 No comments:

and suggested alternatives: http://www.kiplinger.com/slideshow/college/T012-S001-worst-college-majors-for-your-career-2015-2016/index.html
If you stick with these low pay majors, just be sure you don't take out student loans to pay tuition!
Posted by Financial Planning For Women at 2/27/2016 No comments:

How visualization can help you save

Visualize your way to a better retirement with this article by Steve Vernon. "According to a recent study by TD Bank, people who visualize meeting their future goals are much more likely to succeed at achieving them."
According to the study, "people who keep images, photos or vision boards of their goals are almost twice as likely to be confident they'll meet their goals compared to people who don't (59 percent vs. 31 percent)." "How can you use psychology to improve your retirement? While you're working, imagine how you'll look and feel if you don't have to work as hard, and imagine the things you'll do with your newfound freedom. That might give you the motivation to ramp up your savings and spend more time planning for your retirement income portfolio." Give it a try! But don't forget to consider the obstacles and plan for how you will overcome them. See: http://www.cbsnews.com/news/visualize-your-way-to-a-better-retirement/
Posted by Financial Planning For Women at 2/24/2016 1 comment:

Turning 50 and behind on retirement saving?

Are you 50-something and have little saved for retirement? Find out what you can do from Sarah O'Brien, in a special to CNBC.com.
"Start with the low-hanging fruit," said certified financial planner Leon LaBrecque. "For example, if you get a tax refund, put it in your retirement account." Change your attitude from "woe is me" to "I can do it! Find out lots of other strategies to boost your savings and financial security in later life at:
http://www.cnbc.com/2016/02/23/50-something-and-little-saved-to-retire-on-what-you-can-do.html
Posted by Financial Planning For Women at 2/24/2016 No comments:

How To Make Your Money Last: The Indispensable Retirement Guide.
"With How to Make Your Money Last, you will learn how to turn your retirement savings into a steady paycheck that will last for life." This comprehensive new book covers the latest changes in Social Security and health insurance.
Read the first chapter at:
http://janebryantquinn.com/janes-books/
Quinn’s guide to personal finance covers the usual terrain: budgeting, consumer debt, mortgages, college funds and investments. However, not every financial writer is blessed with Quinn’s charm-a blend of Pollyanna and Mary Poppins with a snappy wit thrown in-and her sensible approach to streamlining one’s financial life make this a stellar entry in the genre.—Publisher’s Weekly
Posted by Financial Planning For Women at 2/24/2016 No comments:

Is your storage unit eating your retirement savings?

Storage unit or a comfortable retirement... it's your choice.
"You just dealt with your clutter and your house is much neater. Congratulations should be in order, but instead of taking your former treasures or trash to Goodwill or the landfill, you rented a storage unit. You're spending $20-$300 a month for items you don't use or need.
You've joined the nearly 1 in 10 Americans who are contributing to the profits of the multibillion-dollar self-storage industry. Instead of renting space to store your old electronics, furniture and holiday paraphernalia, you could be funding your future retirement."

Why rent a storage unit for stuff you are not using? Read Karen Haywood Queen's advice on getting rid of your storage unit and all that junk and putting the monthly fee toward retirement. Thanks to Bankrate.com for this excellent advice.
http://www.bankrate.com/finance/smart-spending/is-storage-unit-eating-retirement-savings.aspx 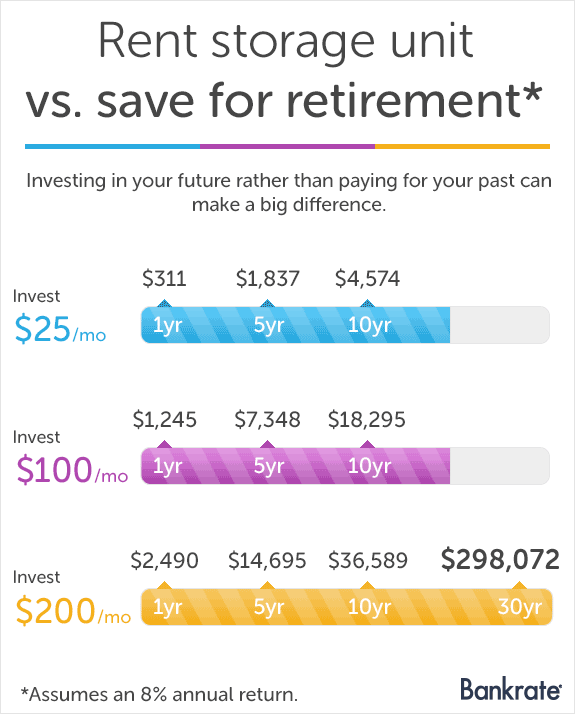 Email ThisBlogThis!Share to TwitterShare to FacebookShare to Pinterest
Labels: retirement

Why Your Divorce Lawyer Can’t Protect Your Finances

"Getting divorced? Be forewarned: Hiring your own financial adviser—right away—can be the difference between a workable settlement and disaster." Financial planner and estate attorney Melissa Montgomery-Fitzsimmons explains the importance of expert financial advice to supplement legal advice prior to divorce, not after the fact. See: http://time.com/money/4213623/divorce-lawyer-protect-finances-financial-adviser/

Email ThisBlogThis!Share to TwitterShare to FacebookShare to Pinterest
Labels: divorce

Can you pass this retirement quiz? (only 5 questions)

Older Americans are very confident about their retirement prospects.  However, the results of a survey of their retirement knowledge suggests many are over confident. "What’s striking about the poor results is that the quiz takers were a select and relatively well-off group: 60- to 75-year-olds with at least $100,000 in financial assets, excluding their home equity. A majority of them also have a financial adviser. One would think that people with both investment and retirement experience would do better. This also raises the question of what the quiz results say about the financial outlook for retirees with fewer advantages." (thanks to Squared Away Blog).  To take the 5 questions quiz and learn more about retirement, go to: http://squaredawayblog.bc.edu/squared-away/can-you-pass-this-retirement-quiz/
Posted by Financial Planning For Women at 2/21/2016 No comments:

Healthy? Health Care will cost you more in Retirement

Medical costs are the largest single expense for many retirees and healthy people can expect that there health expenses will be higher than for people who are less and therefore don't live as long. While this seems counter intuitive because, for younger people, good health means low expenses compared to similar age people who smoke are overweight have diabetes or other health problems. But the flipside of the coin is healthy people live longer and the longer you live the more health care expenses you will incur, something to factor into your retirement planning.
"In preparing the numbers, Empower included premiums for Medicare parts B and D and private Medicare-supplement insurance, as well as out-of-pocket costs for expenses that aren’t covered by Medicare, including medical, dental, hearing and vision care. The projections use inflation rates that vary by health condition, to better reflect the future costs of the drugs and treatments those patients use, and are based on medical costs in Massachusetts" according to W. Van Harlow, director of research at the Empower Institute, which is sponsored by Empower Retirement, a division of Great-West Financial that administers $440 billion in retirement plans. Reported by Anne Tergesen, writing in The Wall Street Journal, Feb. 10, 2016.
Posted by Financial Planning For Women at 2/12/2016 9 comments:

"Compared with the rest of the world, a middle class American" is... wealthy. "To be among the wealthiest half of the world last year, an adult needed to own only $3,210 in net assets." To compare yourself to other Americans, "the median American family had $81,000 in net worth in 2013."
The majority (71%) of the global population -- collectively own only 3% of global wealth, according to Ana Swanson, writing in The Washington Post: https://www.washingtonpost.com/news/wonk/wp/2016/01/21/you-might-be-among-the-richest-people-in-the-world-and-not-realize-it/
Posted by Financial Planning For Women at 2/02/2016 1 comment:

Learn from Melanie how to pay off student loans

Find out how Melanie paid  off $81,000 in college & grad school loans by age 31. It CAN be done with the right attitude & diligence. She combined a positive focus with accelerated payments to accomplish her goal of being debt-free. Read her story and get inspired on the Squared Away blog: http://squaredawayblog.bc.edu/squared-away/how-melanie-paid-off-her-student-debt/
Posted by Financial Planning For Women at 2/02/2016 No comments:

The mission of Financial Planning for Women is to educate women about personal finance and investing and motivate them to take responsibility for their financial future.